Art/Science Collaborations > In a Time of Change 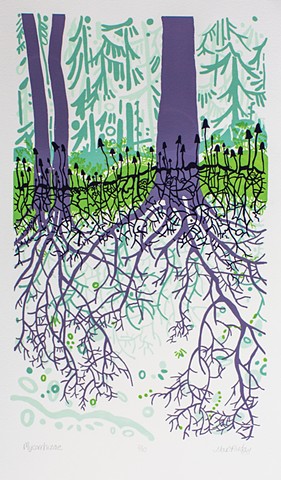 Of the many areas of microbiology I was exposed to throughout this collaboration, mycology, the study of fungi, has had the most significant impact on my work.

This piece is about symbiotic relationships and concepts of connectivity. Within the natural world there are so many examples of mutually beneficial partnerships between organisms. I see this as a model for humanity. The serigraph print, Mycorrhizae, illustrates the symbiotic association of the mycelium of a fungus with the roots of vascular plants and trees. Mycorrhizae are the symbiotic relationships that form between fungi and plants. The fungi colonize the roots of the plant providing increased water and nutrient absorption. In exchange, the plant provides the fungus with carbohydrates formed during photosynthesis. This system of interdependence is a beautiful example of nature modeling for us the value and necessity of working together.

A mushroom walk with the ITOC group on the UAF trails and another at Creamer’s Field, both led by Dr. Gary A. Laursen, provided me with a strong starting point for my own research and exploration. Dr. Laursen and his assistant, Christin Anderson, were able to explain so much about local fungi both above and below the surface.